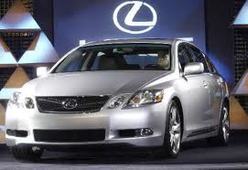 BEIJING - Toyota Motor Corp Thursday announced plans to cut prices of nearly 15,000 auto parts for its luxury Lexus models in China, in response to an industry-wide probe started by the National Development and Reform Commission (NRDC) against automakers overcharging for spare parts through vertical price fixing.

"In response to the NDRC's concerns over monopoly practices in the industry, Lexus China will cut prices of spare parts in China starting from Sept. 1," Toyota said in a statement posted on the Lexus website.

"As a company that is rooted in China, Lexus will strictly comply with China's laws and regulations, and continually improve its business practices."

Toyota has decided to cut the prices of nearly 15 000 Lexus spare parts by an average of 26 percent with radiator parts prices being cut by 35 percent and those of engines and transmissions parts by 30 percent, according to the statement.

Last week, a Chinese government official said the probe had revealed Daimler had violated China's Anti-Monopoly Law of 2008 by charging exorbitantly high prices for its spare parts and after-sales services.

According to Toyota officials, earlier this month Chinese authorities indicated that they would be doing a preliminary probe of Lexus auto parts policies, reported Reuters.

The auto industry alone is not under scrutiny in China. In the last few years Chinese regulators have been monitoring and putting pressure on foreign companies ranging from milk powder makers to electronics and pharmaceutical firms to comply with its anti-monopoly legislation.

Legal experts, however, point out that the authorities appear to be singling out foreign multinationals to comply with laws that apply to both foreign and domestic companies to protect the interests of consumers.

Chinese regulators have so far imposed a penalty of $202 million against 12 Japanese spare-part manufacturers for manipulating spare part prices through a cartel formation. Two of the Japanese companies, ball bearing makers NSK Ltd and NTN Corp announced Tuesday that they were fined $28.43 million and $19.38 million, respectively.

The EU Chamber of Commerce in China, in a statement last week, said competition law should not be used to achieve other goals such as forcing price reductions. The industry lobby said it had received reports that the regulators are forcing companies to accept penalties without a full hearing and avoid involving their governments.

A Chinese Ministry of Commerce spokesman denied this week that foreign companies were being treated unfairly.