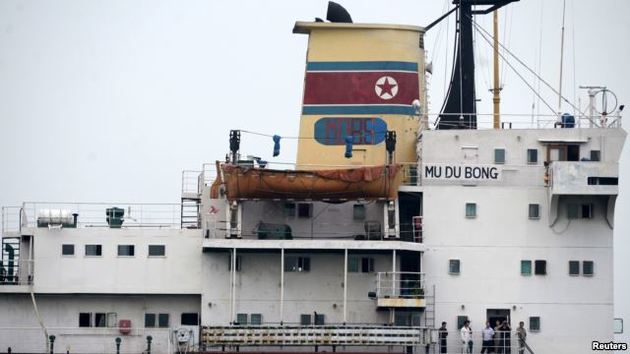 SEOUL - A new study by the United Nations Security Council details how North Korea has effectively evaded international sanctions in the last decade. The study comes as the Council prepares to vote on new sanctions against the secretive and authoritarian state.

The report, written by a U.N. panel that oversees sanctions violations, acknowledges that the four rounds of increasingly stronger U.N. measures imposed on North Korea since 2006, have failed to persuade the Kim Jong Un government to abandon its nuclear and ballistic missiles program.

Given North Korea's recent nuclear test and satellite launch, and its insistence that its nuclear program is needed to deter the U.S. threat, the report says "there are serious questions about the efficacy of the current United Nations sanctions regime."

The U.N. report documents a number of cases where North Korea has evaded sanctions, and reveals how it continues to use the international financial system, airlines and container shipping routes to trade in prohibited items.

A 2006 U.N. resolution requires member states to report all inspections of North Korean cargo suspected of carrying arms or other products that have military purposes, even if no violation is found. But in the last ten years only one member has filed a report.

The government of Myanmar was less than cooperative with the U.N. panel when contacted about the possible involvement of Myanmar-based entity Soe Min Htike in attempts to ship aluminum alloy rods to North Korea. The aluminum rods, which can be used to make nuclear centrifuges, were seized in Japan while in transit in 2012.

The Korea Mining Development Trading Corporation (KOMID) was designated in April 2009 as a main exporter of North Korean goods and equipment relating to ballistic missiles and conventional weapons.

But KOMID has been able to circumvent sanctions on its operations by using a different name and working though the Hong Kong shipping company Leader International.

"They adopted concealment techniques such as the use of foreign intermediaries, front company networks and incomplete documentation," said the U.N. report.

In 2015, Britain informed the panel about an attempt by North Korea to buy miniaturized optical equipment for drones through intermediaries based in China and registered in Hong Kong.

Richard Wang (Dewen Wang in Chinese), director of HK Conie Technology, was listed on the export license application for the drone parts.

In 2013, a member state seized suspected cargo on its way from Beijing to Cairo.

In 2014, the U.N. panel examined a North Korean drone that crashed on a South Korean border island and concluded it was likely made by one of two Chinese companies.

Manufacturers in the Czech Republic and Canada also make components used in the Chinese made unmanned aerial vehicles (UAVs).

An examination of the debris of a North Korean Unha-3 rocket launched in 2012 revealed the involvement of a Taipei-based company, the Royal Team Corporation (RTC).

The report explained complicated payment schemes used to get around sanctions.

The panel found that North Korea tried to hide its illicit dealing with RTC by sending payments through a third party company that it ostensibly paid to host a trade show.

The report reveals North Korean military ties with Uganda, Eritrea and Vietnam. It notes the use of armored limousines from Europe in military parades, the transfer of gold and luxury goods from Israel and Ghana, the ongoing involvement of banned North Korean agents from the Reconnaissance General Bureau and North Korean government ties to the Ocean Maritime Management Company, Limited.

The new U.N. Security Council sanctions that are scheduled for a vote Wednesday are intended to prevent future violations by making inspections mandatory, tightening restrictions and increasing financial oversight.

But the detailed extent of past evasions also illustrates the challenge ahead to implement sanctions against North Korea in many countries, including China, where enforcement has been lax.

Youmi Kim in Seoul contributed to this report.