China offers small arms and fast boats worth $14 million, for free to the Philippines, to provide $500 million long-term soft loans as well 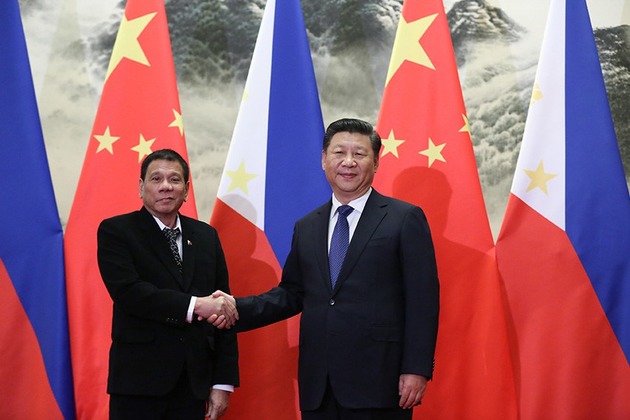 During a meeting with Duterte on Monday at the presidential palace, China's ambassador Zhao Jianhua offered the aid and also pledged a long-term soft loan worth $500 million for other equipment.

After giving Christmas presents to wounded soldiers at an army hospital in Manila, Lorenzana said, "China has given us a list of military equipment and we will go through it to find out what we really need. We might get some small arms, fast boats and night vision goggles because $14.4 million is not that much. We will finalise the deal before the end of the year and a technical working team will soon go there to look at the equipment."

Lorenzana also said that the weaponry would be available in the second quarter next year.

He added, "The Chinese ambassador last night told the president, I know your problem in drugs so we would like to help you."

The deal between the two countries has materialised after a United States senator said he would block the sale of 26,000 M4 rifles.

After years of sour relation between the two countries over the South China Sea dispute, Duterte's visit to Beijing a couple of months ago opened doors for various investments.

Under Duterte, Philippines has aligned with China, moving further away from its long-term ally, U.S.

Duterte bagged about $24 billion in investments during his visit to China.

He said, "China welcomes and appreciates the remarks by President Duterte, whose policy on the South China Sea arbitration meets the fundamental interests of the two countries and two peoples and exemplifies the increasingly deepened mutual trust and amicable relations between the two."

Chunying also said that China would be willing to work with the Philippines to improve relations further and resolve disputes over South China Sea. He said, "Bilateral mutual trust keeps building up and pragmatic cooperation in various fields runs in full fledge with fruitful results."

Earlier, in a move to strengthen alliance with China, Duterte said he would be willing to share oil from the South China Sea with the country, even though constitutional and international law would bar exclusive economic zones.

Philippines' Foreign Affairs Minister Perfecto Yasay in a statement said that 'revitalising' ties with China was one of Duterte's priorities and added that the government would be working to build "confidence and trust" with China.

"This we will continue to do for the foreseeable future, until such time that we achieve a trust level that will allow us to discuss the more sensitive issues in our bilateral relations. I also wish to reiterate what the president has stated in the past that he will not deviate from the four corners of the ruling," Yasay said.

Meanwhile, Philippines' Catholic leaders and rights groups condemned Duterte's plan to bring back death penalty to punish the criminals. Duterte has planned to execute "five or six" criminals daily as part of his war on crime that has killed 5,300 people so far.

"There was death penalty before, but nothing happened. Return that to me and I would do it every day; five or six criminals. That's for real," Duterte said.

An official of the Catholic Bishops' Conference of the Philippines said the church 'totally opposed' Duterte's plan.

Father Jerome Secillano, Executive Secretary at its public affairs office, said, "The Philippines will be viewed as very barbaric. It's going to make the Philippines the capital of death penalty in the world."

Amnesty International Philippines Vice Chairman, Romeo Cabarde also criticised Duterte's comments. He said, "Setting a quota for executions is just too much. One death is too much because we are talking about lives."