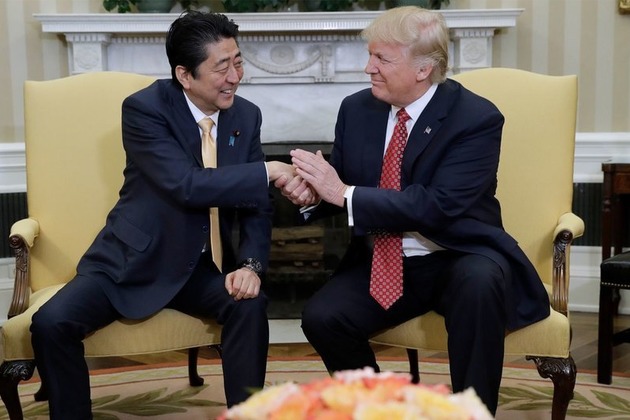 The meeting comes in a bid to calm jitters in Tokyo that have become more strong, considering Trump's inflammatory rhetoric on the campaign trail.

Both the leaders visited Air Force One after which Abe was given a VIP tour of the White House.

They then held a joint news conference at the White House, where Trump called the alliance between the countries the "cornerstone of peace and stability in the Pacific region."

Trump reportedly also vowed to make ties between the two countries "even closer."

Trump said, "We are committed to the security of Japan and all areas under its administrative control and to further strengthening our very crucial alliance."

Trump is said to have insisted that it is important that both Japan and the U.S. continue to invest heavily in the alliance to build up their defence capabilities.

On his campaign trail, Trump had denounced a sizable U.S. trade deficit to Japan and had criticised Japan and South Korea, claiming that they were not paying their share to support American troops based in the region.

In the press conference, Trump claimed that the two issues that he considers to be "very, very high priority" were the shared challenges on North Korea's nuclear weapons programs and China's aggression in the South China Sea and said that both Japan and U.S. would work in close harmony to address the challenges.

Trump said, "We will work together to promote our shared interests, of which we have many, in the region, including freedom of navigation and defending against the North Korean missile and nuclear threat, both of which I consider a very, very high priority."

He said, "On the economy, we will seek a trading relationship that is free, fair and reciprocal, benefiting both of our countries. The vibrant exchange between us is a true blessing. The mutually beneficial economic relations have been built by Japan and the U.S."

In a joint-statement, the two leaders announced a three-pronged approach of mutually-reinforcing fiscal, monetary, and structural policies to strengthen domestic and global economic demand.

The joint statement said, "They emphasised they remain fully committed to strengthening the economic relationships between their two countries and across the region, based on rules for free and fair trade. This will include setting high trade and investment standards, reducing market barriers, and enhancing opportunities for economic and job growth in the Asia-Pacific."

They also confirmed that Article V of the U.S.-Japan Treaty of Mutual Cooperation and Security covers the Senkaku Islands.

The statement said, "They oppose any unilateral action that seeks to undermine Japan's administration of these islands."

"The U.S. and Japan oppose any attempt to assert maritime claims through the use of intimidation, coercion or force. The U.S. and Japan also call on countries concerned to avoid actions that would escalate tensions in the South China Sea, including the militarisation of outposts, and to act in accordance with international law."

In the press statement, Abe praised Trump and called him "an excellent businessman."

He cited Trump's struggle, and praised his energy, adding, "The United States is a country of opportunity. That has always been, and will not change. That is why Japanese companies are investing across the country. That is why in the last year there has been $150 billion of new investment made into the United States."

The Japanese leader further pledged that his country would play a "greater role" in defense and security operations.

Abe added, "Both Japan and the United States have a great chance to expand free trade and investment in the Asia-Pacific region, which is achieving ever more rapid growth. But that must be done in a fair manner."

Meanwhile, commenting on the meeting, Takumi Sakuyama, a former Japanese government TPP negotiator and an associate professor of agriculture at Tokyo's Meiji University, said that it is "risky" but "inevitable" for the Abe administration to respond to a U.S. request to start negotiations toward a bilateral trade deal.

He said, "Bilateral discussions are going to give an advantage to the larger economy – the United States – and Mr Trump's record of complaints about Japan's automotive trade, beef tariffs and currency manipulation indicates he will ... drive a hard bargain."

Rich Ellings, president of the National Bureau of Asian Research, a non-partisan U.S.-Asia policy think tank based in Washington has said, "To maintain support from Japanese voters, [Abe] has to promote economic growth and protect Japanese interests including those of its big automakers. Japan has a very difficult time truly reforming domestically and opening up its market fully – that's why the negotiations in the TPP included some remarkable things, unprecedented for Japan."

A lot of the global focus however was on the 'awkward' handshake between the two world leaders.

The handshake, that lasted a full 19-seconds was awkward and uncomfortable and quickly became a meme on the social media and a hit on the Twitterverse with thousands of tweets on Abe's grimace at the end of the strained handshake.

Trump meanwhile claimed Abe had "Strong hands" and mimicking a golf swing before heading with Abe to his winter retreat in Palm Beach, Fla., Mar-a-Lago,

At the news conference, Trump even said of his greeting of Abe outside the West Wing, "I grabbed him and hugged him because that's the way we feel. We have a very, very good bond, very, very good chemistry. I'll let you know if it changes. But I don't think it will."

One user said, "The Trump Handshake goes on like a Family Guy joke. Goes on so long it gets awkward and then keeps going until it becomes funny again."

Yet another user said, "Trump's first press conference with a foreign leader is awkward and embarrassing. Shinzo Abe's eye roll though."

"That handshake Trump does is just insulting. Look at Abe's obvious relief when he's released from it," one user said.

While another said, "I felt sorry for the Japanese leader. During their handshake, he tried to get his hand back, but Trump was having a love affair with it."

In the melee, when Canadian Prime Minister, Justin Trudeau tweeted, "Strong Canada-US ties help the middle class in both our countries. Monday, I'll meet @realDonaldTrump in DC to keep working for that goal."

A tonne of the Twitterati attention was drawn to him, with many advising his to stay wary of handshakes in the White House.

One user warned him, "Don't forget the hand sanitizer."

And another said, "@JustinTrudeau @realDonaldTrump Prepare for a 20sec handshake as he stares into your eyes, and speak French so he can pretend to understand."

One user said, "I'd like to apologize in advance for whatever Trump does/says/tweets about you after that meeting."