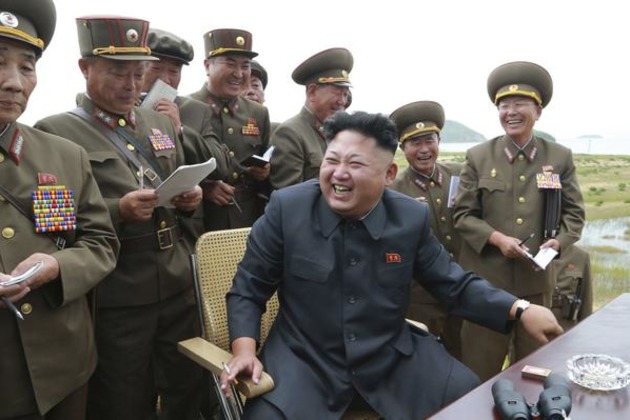 SEOUL, South Korea - A plot to rid the world of its nuclear troubles, believed to target the North Korean despot, Kim Jong Un is in the making.

South Korea is believed to be creating a special 'dronebot combat' team that will target Kim Jong Un.

The special unit, being put together by the South Korean army would use drone swarms in combat, and it is expected to become operational next year.

The combat team will reportedly target the North's missile, nuclear and other military activities.

According to experts, the small weaponized drones could potentially fly into North Korea to attack rocket launchers, radar installations or communications infrastructure.

They further said that they believe the drone swarms could be effective in targeting ground forces and convoys of vehicles, among other things.

Dean Cheng, a defense expert and senior research fellow at the Heritage Foundation, a Washington-based conservative think tank said, "Drones are capable of doing some amount of surveillance and attacks against very soft targets. There's a pretty reasonable chance they can escape detection."

According to South Korea's Yonhap news agency, the country's army envisions what it calls a 'dronebot' force that would utilize drone and robot technology.

The report stated that besides armed drones, the unmanned aircraft also could be used in reconnaissance and surveillance missions.

Yonhap noted, "We will launch a dronebot combat unit next year and use it as a 'game changer' in warfare."

The report noted that the special dronebot unit could use the weapons "against such core North Korean targets as nuclear and missile sites. In case of a contingency, swarms of dronebots will be mobilized to launch attacks."

According to the report, drone swarms of hundreds of small unmanned aircraft can potentially overwhelm forces on the ground and would also be difficult to entirely shoot down but could be vulnerable to enemy jamming.

Further, experts revealed that the drones likely would be able to communicate with each other and have flights preprogrammed and rely on satellite guidance.

However, they could carry sensors that would allow them to recognize specific features on the ground or moving targets.

Meanwhile, North Korea has been developing its own plans - in the form of drone weapons.

Earlier this year, a North Korean defector claimed that Pyongyang may have hundreds of attack drones capable of unleashing biological and chemical weapons.

According to analysts, the drone swarms by South Korea could be used to target a leadership convoy or limousine, including one carrying North Korean leader Kim Jong Un.

The plot doesn't come out of the blue, however.

In September, after North Korea conducted its sixth nuclear test, reports revealed that South Korea was forming a "decapitation unit" to target the hermit regime's leadership.

Kazianis added, "If you build them cheap enough and build enough of them you almost have a situation like it's the 'Terminator' - basically having drones and robotic weapon systems. So this is why the United States and countries like South Korea, who have the money and the R&D capabilities, are investing in them."

Meanwhile, John Schaus, a defense expert and fellow in the International Security Program at the Center for Strategic and International Studies, a Washington think tank warned, "North Korea is believed to have hundreds if not more well-defended artillery units."

Schaus added that the North's military has artillery placements that are sometimes dug into mountains so they can retreat back for protection.

However, with a swarm of drones, the South Koreans could identify those units as they come out and strike them.

Experts meanwhile believe the drone swarms also would be more difficult to detect than most combat aircraft.