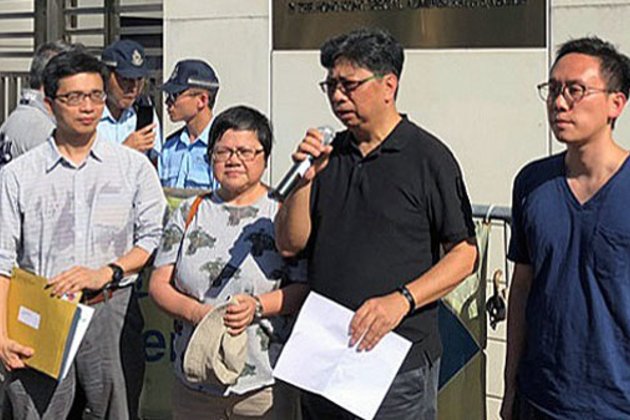 Journalists in Hong Kong have hit out at the ruling Chinese Communist Party's representative in the former British colony after a television news journalist was detained by police in Beijing as he tried to cover a disciplinary hearing for a prominent human rights lawyer.

"We demand [that] the Beijing authorities ... immediately release the cameraman and stop any uncivilized acts and suppression against the reporting work of journalists," the Hong Kong Journalists' Association said in a statement immediately following the detention of Chui Chun-ming, a cameraman for Now TV.

Chui was hauled away at about 9 a.m. on Wednesday in front of the headquarters of the Beijing branch of the China Lawyers' Association, which says it will revoke the license of rights lawyer Xie Yanyi, who once wrote to President Xi Jinping calling for democratic reforms.

"We strongly condemn the violent arrest of a Now TV News journalist who was reporting on a human rights problem in Beijing and demand mainland authorities to refrain from further suppression against the work of journalists," the letter, signed by seven news industry associations, said.

It said Chui should never have been detained, as he holds a valid press credential issued by the Chinese government, which he produced when requested to do so by a police officer.

"When he asked to have the identification back, more than five men, including uniformed public security officers, pushed him onto the ground," the letter said. "They handcuffed and took him into a police vehicle ... He suffered bruises on different parts of his body."

It said police had offered no explanation to Chui for his detention or his release.

"We express strong indignation and lodge strong protest against the Beijing authorities," the letter said, calling on Hong Kong Chief Executive Carrie Lam to stand up for Hong Kong journalists with the central government in Beijing.

"We urge the mainland authorities to protect the personal safety and the lawful right of reporting of Hong Kong journalists," the letter said.

'Not enough to express concern'

HKJA chairman Chris Yeung said the attack on Chui came days after a journalist from Hong Kong's i-Cable News was punched by two village officials while reporting on the 10th anniversary of the 2008 Sichuan earthquake at the weekend.

"The incident happened when our chief executive was visiting Sichuan, and she expressed concern about it at the time to the Hong Kong and Macau Affairs Office," Yeung said. "Now everyone has seen how the Now TV cameraman was subjected to an unacceptable level of violence."

"It's not enough just to express concern; the government has a duty to safeguard Hong Kong journalists in the course of legal reporting activities in mainland China," he said.

"Any journalist covering events in mainland China with official approval, that's to say, normal reporting activities, should be sure that they are safe ... and shouldn't be subjected to violent treatment," Ma told RFA.

"The law enforcement agencies should explain publicly why they are treating journalists in this manner," he said.

"The Hong Kong government was in immediate touch with the central government liaison office very shortly after this incident to ask for an explanation and for updates on this incident," Cheung told reporters shortly before Chui was released.

"We have just received information that the Hong Kong and Macau Affairs Office knew of the incident and is liaising with the relevant departments."

Meanwhile, Civic Party lawmaker Kwok Ka-ki told government broadcaster RTHK that Hong Kong journalists may have to stop covering news on the mainland in light of violent attacks against them.

"This is the second time within four days that a reporter coming from Hong Kong has been assaulted by the authorities on the mainland and this is a very serious incident," the station quoted Kwok as saying.

Reported by Lam Kwok-lap for RFA's Cantonese Service, and by Shi Shan for the Mandarin Service. Translated and edited by Luisetta Mudie.