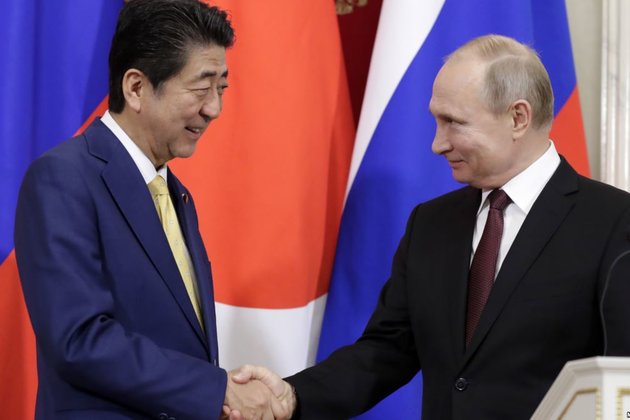 Putin spoke in Moscow on January 22 after talks with Japanese Prime Minister Shinzo Abe, who said that he and the Russian president had confirmed their determination to find a solution to a decades-old territorial dispute.

Abe also said that the two countries' foreign ministers were set to meet in February to pursue talks about the dispute over the four southernmost islands in the Kuriles chain, which runs from Hokkaido in Japan to Russia's Kamchatka Peninsula.

Putin and Abe's face-to-face talks at the Kremlin were to be followed later in the day by a broader meeting including more officials from the two countries.

Ahead of the meeting, Putin told Abe that diplomats on both sides had 'worked a lot...on the issues surrounding the peace agreement,' while Abe responded that he was interested in developing ties and added, 'I would like to have a through discussion on the peace treaty.'

Despite an autumn agreement to intensify negotiations, the Kremlin has played down the prospects of quickly resolving the dispute over the four southernmost islands in the Kuriles chain, which runs from Hokkaido in Japan to Russia's Kamchatka Peninsula.

Kremlin spokesman Dmitry Peskov said on January 21 that neither Russia nor Japan would abandon their national interests, adding that 'the talks are in their initial stage' and would likely be a 'drawn-out' process.

'We urge everyone to be realistic and to proceed from the fact that we must seek a solution with constant respect for the national interests of the two countries,' Peskov said. 'No one is going to give ground on their national interests.'

Peskov declined to comment on a report by Japan's Kyodo news agency quoting unnamed government sources in Tokyo who said Abe planned to propose signing a peace treaty if Moscow hands back control of two of the disputed islands.

Suga said he wanted to refrain from making 'any forecasts' about the Moscow talks.

'At the same time, Prime Minister Abe said that he intends to facilitate talks on the peace treaty as much as possible,' Suga said. 'We are expecting a constructive dialogue.'

Soviet troops seized the islands between the Sea of Okhotsk and the Pacific Ocean during the final days of World War II.

Tokyo's refusal to recognize Moscow's sovereignty there is an issue that has stalled the peace process since the 1950s.

The islands are known in Russia as the Southern Kuriles and in Japan as the Northern Territories.

Three of the islands are inhabited while the fourth, Habomai, is actually a group of islets where only a Russian border patrol is present.

The idea of Moscow ceding any territory to Japan in exchange for a peace deal is not popular in Russia.

Several protests have been held in Russian cities in recent weeks, including a demonstration in Moscow on January 20, a day before Abe's arrival in the Russian capital for the talks.

About 100 nationalists and leftists protested outside the Japanese Embassy in Moscow ahead of the talks and 11 of them were detained, opposition politician Sergei Udaltsov said.

Udaltsov said the detainees were members of his Left Front organization and the Communist Party, and that three of them had been released after the group was taken to a police station.

A survey conducted in November by independent Russian pollster Levada Center suggested 74 percent of Russians oppose exchanging some of the islands for a peace deal, while 17 percent would support such an exchange.

RFE/RL journalists report the news in 25 countries where a free press is banned by the government or not fully established.