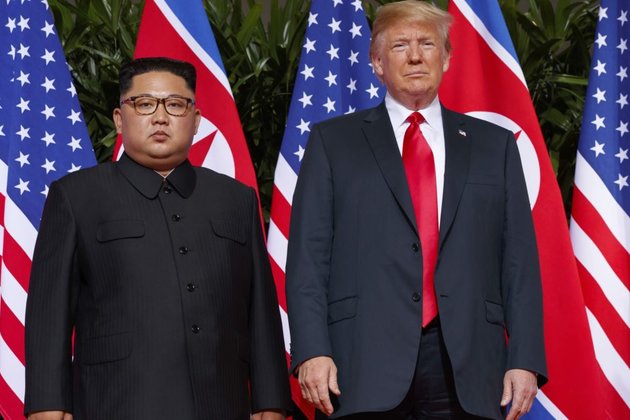 Vietnam's selection as the venue for the second summit between President Donald Trump and North Korean leader Kim Jong Un is largely a matter of convenience and security, but not without bigger stakes.

Washington's goal for the talks Feb. 27-28 is for North Korea to agree give up its nuclear weapons. North Korea frames the issue more broadly, seeking a removal of the 'nuclear threat'' from U.S. military forces in South Korea.

Host Vietnam hopes to boost its diplomatic leverage against its powerful neighbor, China, which contests waters in the South China Sea claimed by Hanoi.

But Vietnam's history as a U.S. adversary that transitioned on its own terms to a dynamic free-market economy under a communist political system suggests a larger meaning for the summit.

'By choosing Vietnam, the two leaders send a strong strategic message to the world that they are willing to make a breakthrough decision to turn an enemy into a friend and together make the world a better place, following the example of the U.S.-Vietnam relationship,'' said Le Hong Hiep, a research fellow at the ISEAS Yusof Ishak Institute in Singapore.

America's past military involvement in Vietnam, whether it's seen as tragic or noble, provides a historically dramatic stage for Trump to again draw attention to his foreign policy accomplishments.

As a single-party communist state, Vietnam boasts tight political control and an efficient security apparatus, and successfully hosted the Asia-Pacific Economic Cooperation meetings in 2017, and the regional edition of the high-powered World Economic Forum last year, both in the central coastal city of Danang.

'Like Singapore, where they met last time, Vietnam is a very secure place,'' said Murray Hiebert, senior associate of the Southeast Asia Program at the Center for Strategic and International Studies in Washington. 'Vietnam's security police are able to keep away crowds of the curious and keep journalists in designated areas.''

Trump's attendance at the 2017 APEC meeting means 'he's familiar with the country and has good rapport with its leaders,'' Hiebert said.

This is friendly turf for Kim. Even though North Korea has remained mired in Cold War isolation while Vietnam's postwar path led toward integration with the globalized economy, the two communist countries share a history of anti-imperialist struggle and ambivalent relations with common neighbor China.

'Vietnam and North Korea have long had fraternal communist ties, so North Korea is familiar with the country and its officials. North Korea would also feel confident that Vietnam's security apparatus could secure Kim's protection,'' Hiebert said.

There's also the bonus that a flight from Pyongyang to a meeting in Vietnam is roughly two-thirds of the six-hour flying time to Singapore, and none of it over hostile territory.

A forward-looking North Korea might learn something from Vietnam's impressive economic growth due to 'bold economic reforms, proactive integration into the world economy, and excellent partnerships with strategic partners, with the U.S. and South Korea among the most important ones,'' said Vu Minh Khuong, associate professor at Singapore's Lee Kuan Yew School of Public Policy.

U.S. Secretary of State Mike Pompeo made a similar point when he visited Hanoi last July after two days of talks in North Korea.

'The leaders of Vietnam realized their country could reform, it could open up and build relationships without threatening the country's sovereignty, its independence, and its form of government,'' he said in a speech to Hanoi's business community. 'I have a message for Chairman Kim Jong Un: President Trump believes your country can replicate this path. It's yours if you'll seize the moment.''

'Vietnam is locked in a pretty intense rivalry with China in the South China Sea, so Hanoi is looking for regional and international diplomatic support as a hedge against Beijing, and hosting a summit like this would certainly strengthen its international profile,'' said CSIS scholar Hiebert.

In particular, helping Washington achieve its Korean policy goals could help fulfill Vietnam's desire for closer relations with the U.S., both to encourage trade and investment and serve as a strategic counterweight to China.

However, intense media coverage of the summit would attract significant international attention from tourists and investors, said research fellow Hiep.