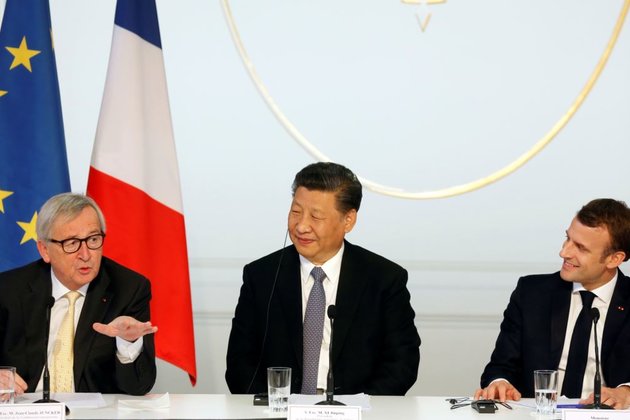 The Paris meeting with Xi, which came ahead of a key EU-China summit planned for April 9, brought together some of the blocs biggest heavyweights: President Emmanuel Macron of France, German Chancellor Angela Merkel, and European Commission chief Jean-Claude Juncker.

At a joint press conference following the talks, Macron stressed what he described as areas of convergence between the European Union and China, two of the worlds biggest economic powers. Among them: intensifying the fight against climate change, denuclearization of the Korean peninsula and development and security in Africa.

Both sides, Macron said, want to construct a renewed multilateralism that is more just and balanced.

President Xi said the world is facing major challenges and peace and development were key. He described the growing threat of protectionism and unilateralism.

The cooperation through which China hopes to expand its ambitious 'Belt and Road' infrastructure and investment initiative initiative, however, is controversial and divisive within the European Union. As Germany's Merkel said, 'Europe wants to join the Belt and Road plan, but it demands reciprocity.'

Several areas stressed by the two sides, including EU and Chinese support for the Paris climate agreement and the Iran nuclear deal, contrast with positions taken by U.S. President Donald Trump.

The Chinese leaders visit to France is the last leg of a European trip marked by multibillion dollar deals, including a major Chinese purchase of Airbus planes.

Earlier during Xi's visit to in Rome, Italy became the first G-7 nation to sign on to Chinas Belt and Road project.

Xis visit was greeted by some rights protests. Media watchdog Reporters Without Borders also released a new report on Chinas alleged efforts to stifle media freedom abroad, as well as at home.

Cedric Alviani, the group's East Asia Bureau director, said, What we expect from that report is that, all around the world, journalists would start investigating in their city, in their region, in their country on the way Chinese authorities are pushing their influence.

Alviani said Chinas Belt and Road initiative is one way Beijing is spreading not only its economic, but also its ideological influence.