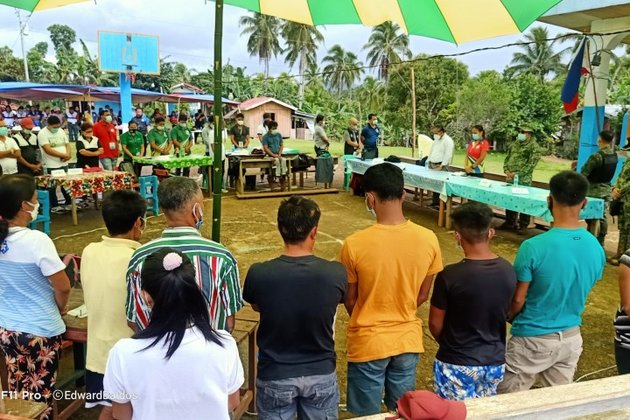 BORONGAN CITY, May 13 (PIA)-Despite the muddy and slippery trail to distant Brgy. San Isidro, Quinapondan town, the Serbisyo Caravan pushed its way to this hinterland village.

There is no service road to the barangay yet so that the medicines, food, food packs and all treats for distribution were carried on the backpacks of the menfolk. Heavier loads were carried by the 'kangga' (carabao-led carriage).

The NICA representative lectured on the deceptive recruitment by the NPAs and urged them to support the government instead.

PNP Police Director Carlito Abriz said that no matter how far the barangay is, the government tries its best to reach them and offer the different services.

Deputy Brigade Commander of the 801st Infantry Brigade Lt. Col. Lenart Lelina inspired the audience by announcing that the Office of the Presidential Adviser (OPAPP) has allotted funds for the badly-needed road to the barangay and to extend even more to Brgy. Cagdaja, the last barangay of Quinapondan.

Mayor Rafael Asebias also lit up the eyes of the local residents when he announced that some P30-M fund that came from the Office of the President will finance the road construction from Brgy. Anislag to Brgy. Cagdaja.

"Magsisiguro na kami pananom hin mga duma kun mayda na namon kalsada, makuri it pagkargada hit amon mga duma ngat ha bungto," (We will be inspired to plant more rootcrops if there will be a road as we can easily transport our products to the poblacion.) said Punong Barangay Igmedio Oliverio.

Another need that Kap. Oliverio yearns is a potable water system.

He said that they can fetch their water in some springs available and he fears that it may not be safe especially for the children.

The DSWD handed 27 families cash assistance of P3,000.00 each. Edison Cinco, the team leader of the young DSWD team said he felt the grateful expression of the rural folks as he handed them their money.

Jeffrey Odevilas nudged this reporter to take a video and his picture if only to tell the world that he is happy with the 'grasya' (the P3-K) he received.

Billy Tohong, the representative of the Office of Sen. Bong Go said that they will distribute rubber shoes for the locals, while his younger members gave out food packs from a famous food chain that children loved. He also gave out toys for the children and some hygiene kits.

The Bureau of Fire Protection (BFP) brought along their two mascots Berong Bumbero and Berang Bumbero to the delight of the children present.

Representatives of various officials who braved to trek for almost four hours the muddy and slippery trail to San Isidro are from DENR, DSWD, PCSO, OCD, DTI, DA, TESDA, PIA, DILG and DOH with scores of the army and the police. (nbq/PIA E. Samar)

MOSCOW, Russia: For the second time a Russian court has fined Facebook and Telegram for not taking down content banned ...