SINGAPORE, Dec. 12, 2022 /PRNewswire/ -- E-verse, a Singapore-based blockchain super eco-system successfully held the biggest Metaverse concert "Musically Yours by the Kakkars" recently in November 2022 which featured India's number 1 top streaming artist Neha Kakkar and singer song-writer Tony Kakkar, who have a combined following of more than a 100 million. Along with their global popularity, this was the first time ever the star siblings performed together inside a Metaverse - guaranteeing a pathway to success.

The ticketed concert event, which was live streamed at nehatony.everseapp.com, was a celebration of Bollywood fandom and cutting-edge technology. It offered an array of premium-built experiences for the stars' hardcore fans through combining real-world experiences and the Metaverse into a seamless environment.

"It was a breakthrough metaverse event as E-Verse continues to trailblaze web3 utility and entertainment. We do what enhances human experiences, not just for technology's sake. We have now a proven new way to delight fans" says Sithi Srichawla, CEO of E-verse. 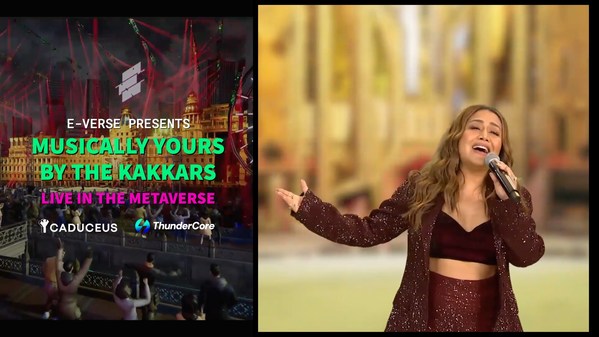 From the moment fans entered the platform they could create personal avatars of themselves to travel around E-Verse city which was a large scale Metaverse playground custom-built around a massive Neha and Tony concert hall. People could walk or ride on the E-verse hover bike or even play in a variety of game stations from the sponsors to earn tokens and free tickets.

On the concert day, fans were transported from the Metaverse environment into the concert where Neha and Tony performed their greatest hits like Manali Trance, Kala Chasma, and Dheeme Dheeme against the backdrop of fairytale palaces and sapphire valleys of a distant world. VIP ticket holders were given the once-in-a-lifetime opportunity to dance with Neha and Tony as virtual backup dancers on the concert stage, participate in a global chat as well as send emoticons to the stars.

"It was extravagant, exciting, and very engaging. I danced with Neha and Tony right there on the metaverse stage as if I was there in person. That was the ultimate highlight for me." Says Aishwarya Verma, a die-hard Neha fan.

With the mission of merging the Web2 and Web3 world, E-verse also launched NFT ticketing for the first time ever for the Indian market along with the normal e-ticketing. This was executed through Caduceus and ThunderCore blockchains who provided their advanced solutions for Neha and Tony's fans to be able to buy the collectible NFT tickets and enter the concert with a simple wallet connection.

Chris Wang, the CEO and Co-Founder of ThunderCore, stated "The Neha and Tony Metaverse Concert was just the start of the mission for ThunderCore and E-verse to bring about mass adoption of blockchain technology with an enormous user acquisition pipeline. There are some big projects still in progress, stay tuned!"

PRAGUE, Czech Republic: Ahead of her visit to Taipei, Marketa Pekarova Adamova, Speaker of the Czech Lower House, reiterated to ...

WASHINGTON D.C.: The Biden administration has stopped issuing export licenses to US companies seeking to ship most items to China's ...

NAYPYITAW, Myanmar - According to an announcement broadcast by state-run media on Wednesday evening, members of Myanmar's National Defence and ...

TOKYO, Japan: In light of a tense security environment following Russia's invasion of Ukraine and Moscow's growing military cooperation with ...

TOKYO, Japan: In a statement posted on the website of the Chinese Embassy in Tokyo, Beijing announced that it will ...

TOKYO, Japan: Honda has announced that it will manufacture a new hydrogen fuel cell system, which was jointly developed with ...

As prices of EVs fall, manufacturer Rivian to reduce workforce by 6%

IRVINE, California: In an effort to cut costs in preparation for an industry-wide price war, electric vehicle manufacturer Rivian Automotive, ...

SANTA CLARA, California: One week after Intel forecasted lower-than-expected sales caused by a loss of market share to rivals and ...

WASHINGTON D.C.: As part of a wider policy drive to increase competition in consumer markets, President Joe Biden has announced ...

OSLO, Norway: Ending a three-year run of profits as stock and bond prices were hit by rising inflation and Russia's ...